Skip to content
Previous Next
What is your mother’s gift to you?

The ancestral heritage of our mothers, beneficial or baggage?

When we are pregnant we have lots of time to plan and ponder our new role as mom.  What kind of mom do you wish to be?  Is there a gender that you have any fears around raising? What was your relationship like with your mother? What aspects from your mother do you wish to pass on and which do you choose to abandon?

I saw a pregnant woman today who was expressing some fear around bringing a girl into her life.  She did not want to recreate the same disconnected relationship that she has experienced with her mom. Interestingly enough she was also having some problems in her left side sacroiliac joint in her back.  That joint was jammed and unable to move as freely as it needed to.

The Feminine and Masculine 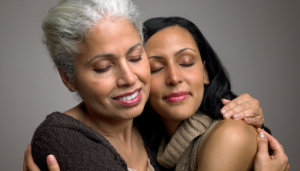 The left side of our body represents the feminine aspects of ourselves and the right side the masculine.  In Tami Lynn Kent’s book the Wild Feminine, she talks about the ancestral lineage that we carry energetically from our mothers on the left side in the back and our fathers on the right side. This corresponded to my client’s current problem area.

When I asked her about her mother’s relationship with her mother there was the same disconnect between them.  This dysfunctional relationship was being handed down from mother to daughter for generations and she was very aware of it and not wanting to repeat it.  I asked her to sense into that energetic chain of poor relationships between females in her family and sever it in whatever way felt best. She did so and her sacrum released.  I also asked her to look at the women in her family and to find the traits that she was proud of and to honor those traits.

In releasing those qualities of what doesn’t feel right to us and hanging on to those that do, we consciously create our future.  It’s only in releasing these held bonds that bind us to our ancestry, once we become aware of them, then we can truly have freedom in our relationships and in creating our life.

Growing up in my family, my mother and grandmother were the queens of doing.  Constant busy bees, doing whatever they needed to fill up the time, avoiding any moments of downtime to just be.  My great grandmother was a mother 14 times over so I can only imagine how busy her life must have been.   I too took on that role thinking “I just like to do things, there’s nothing wrong with that!”  It wasn’t until several people continued to ask me why I did so much “doing” that I really started to stop and ponder the question.  What was this all about?  I realized there was a fear inside of just being with my feelings and myself.  I faced my fears, my feelings, and myself and saw the ancestral chain that bonded me to my heritage and I wanted to stop this insanity.    While I released this constant need to do and was able to just be with myself, I embraced the wonderful quality of the power of getting things done that was so strong in my female lineage.

I had another client who came to me while pregnant complaining of left hip pain.  In feeling into her left hip there was a holding pattern, blocking the flow of energy around her left hip and pelvis.  I helped her to feel into that pattern and it became clear to her that she too did not want to recreate the same connection with her soon to be born daughter as she had with her mom.  Realizing this, she was able to come to terms with what she did want to create with her daughter; she released the fear and pattern in her ancestral chain and became conscious of creating a new way of connecting with her child.

Pains in our body can be more than just something wrong with the tissues.  Energetic holding patterns can create pain. When we become aware of what the holding pattern is about, we can release them and allow us to grow and connect to others and ourselves in a new way.

What ancestral patterns are you carrying on?   Once you become aware of the pattern you have a choice whether you wish to continue creating it.  How is it serving you?  What would it take to release any detrimental patterns in your life?

I would love to hear from you; post your comments below so we can all learn from each other.

Holistic Treatment of the
Pregnant Body - $597

Holistic Treatment of the Postpartum Body - $597